Proud but maybe a little embarrassed are Ken and Josie Meno of Westlake whose youngest son Vincent appears as "Mr. January" for the 2000 edition of the Campus Men® calendar produced at Ohio State University.

I got to talk with Vince, a 1998 graduate of Westlake High School last week, just after his photographer contacted us. All the OSU guys featured in the calendar get the opportunity to make a little money by selling copies of it.

Vince said he's sold 70, so far. He said it helps being a psychology major because he knows how to "sweet talk the customers," most of whom are students who don't have a whole lot of money.

"Obviously we can sell it better than other people because we're in it," he said.

Vince described his mom as "a good Catholic lady" who was a little embarrassed by his lack of clothing in the picture. She was interviewed last week on WEWS TV.

The youngest of six children, Vince was born in Guam and is studying under the Army ROTC program. At Westlake High n School, the student was active in football and track.

He admits to being a little more conservative back then, and never, thought of posing in the buff.

You can catch a glimpse of Vince and his strategically placed teddy bear by calling up www.campusmen.com on the Internet. 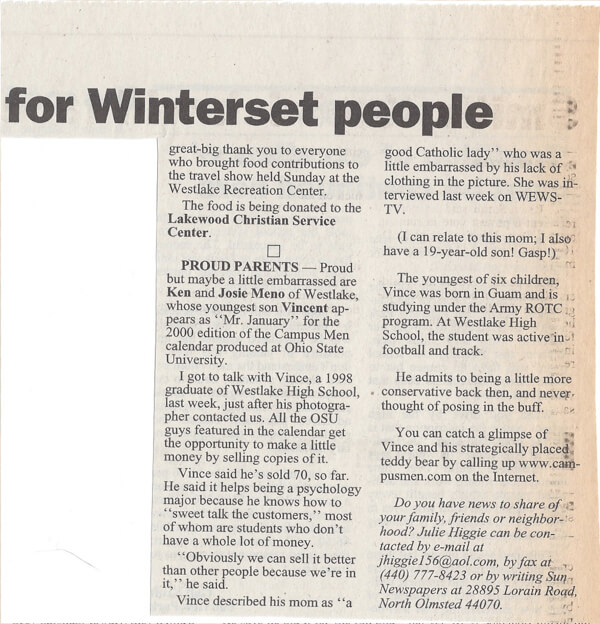