Twelve guys are about to become famous on your campus ...by appearing in your college's Campus Men Calendar.

These "Campus Men" are destined to be sensations when the calendar is unveiled. Past calendars have been so popular that girls on campus and throughout the nation await their release each year. Our upcoming group of Campus Men just might be our most popular yet! - And we'd like you to be a part of the excitement.

Being featured in a calendar can be one of the most exciting things to happen to you as a college student. It is also an excellent way to "leave your mark" during college.

(And of course, it is a great way to get attention from girls!) 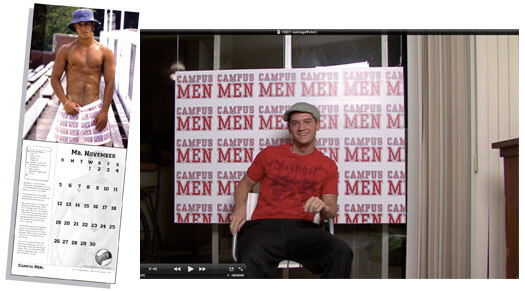 The Campus Men Calendar features only students enrolled at your college.

To be considered, create a profile on CampusMen.com.

Benefits of Appearing in a Calendar:

To be one of the twelve students selected to appear in the calendar, you must encourage family, friends anc coworkers to pledge to order a minimum of 48 calendars through your Fundizer page. You can read our rules - which explain the details of this requirement.