Chad Beldon is all grown up now, but when he came home to show off one of his college projects, all his mom could do was think about the time when her boy was a baby.

It might have had something to do with his bare bottom practically leaping off the page.

"My God, I haven't seen that since I changed your diapers, since you were 2 years old!" Kathy Beldon of Lorain said to her son as he showed her his pictures in the 2001 Campus Men Calendar, the back cover of which has his derriere on display.

And, apparently, they're not cheeks only a mother can love.

"A lot of women - ladies from work, neighbors that knew Chad growing up - they just thought that was the cutest thing," his mom said. "It is cute, isn't it?"

The women students at Ohio State University seem to think so.

"It's not supposed to, because I have a girlfriend, but I got to say it hasn't hurt at all with the ladies," Beldon said. "I had tons of girls come up to me and it was like instant fame on campus. They say, 'Hey, I've seen you naked.'"

There is no women's calendar this year.

Sean Ashbrook, an Akron native who began publishing calendars using student models while he was an OSU student more than a decade ago, decided not to produce the Scarlet and Gray Girls this year.

Ashbrook last year was sued by OSU over trademark violations and in a federal court ruling, he was forced to stop selling some of his calendars, which had women in various trademark-protected OSU accessories. He also turned over thousands of calendars to the university and gave up negatives and other materials. The school also argued that the words "scarlet and gray" constituted an unregistered trademark. The calendars were destroyed.

Ashbrook said he had to scrap the women's calendar entirely this year because the market for it is alumni who buy it for the OSU angle. The men's calendar can thrive on a generic collegiate theme - you wouldn't know they were OSU students by looking at it, he said - because there isn't as much competition.

Ashbrook, who after a break is re-enrolled at OSU and working toward his marketing degree, recruits the male models in the winter and shoots them in the spring. The calendars are sold by the models and on the Web at www.campusmen.com and through Amazon.com.

He's not nearly as evasive when talking about his guys.

He describes Beldon in his photo on the calendar's cover - in which Beldon's wearing a baseball uniform with the pants bunched at his ankles - as a "naughty" baseball player.

Hot months Beldon - Mr. June - noted that women students aren't complaining about that photo, nor the rear-end shot on the back of the calendar, nor his surfer-dude pose for June.

He said he was walking through the hallway of a women's dorm this month and saw his picture hanging on a door. "She had my month hanging up," he said, noting that it was still a few months early for that.

But June isn't the only hot month.

Marrelli, who was asked to audition for the calendar in an e-mail, heats up March. His face in the freshman yearbook caught the eye of Ashbrook and his associates.

And since then, he's heard plenty of teasing from his buddies: "They call me Mr. March and boy toy and all that," he said. "In March, it will be weird to know I'm on a lot of dorm room walls."

Wong, Mr. February, already has warmed to that idea.

"Not to sound cocky, but a lot of girls I sold the calendar to, they have February up in January," said Wong.

He and the others have made plenty of sales. In addition to popularity on campus, publicity and the chance at being discovered as a model (Beldon has appeared on the Jenny Jones show and may appear in an Abercrombie & Fitch catalog), the student models earn money by selling the calendars. They buy them wholesale from Ashbrook for $6, Wong said, and sell them. Suggested retail price is $12.95, though many of them get $15 apiece.

"It's kind of embarrassing walking around with a naked picture of yourself. But I went to the freshman dorm and sold 100 of them in two days. All those freshman girls are new and excited to be at Ohio State," he said.

Price of fame The money is good. Still, fame has its price.

"It's kind of scary," said Wong. "I feel like I have to dress nice everyday and not just roll out of bed."

Wong said he was "just an average college kid who liked to lift weights a lot" when Ashbrook approached him last year about being in the calendar. Even after being chosen, though, Wong said he had to work to get in top form.

"I just wanted to get real cute so I had to live on protein shakes and tuna fish and I wouldn't eat past 6 o'clock and I didn't drink [alcohol] the whole quarter," he said. "I got real lean and my stomach got to be a perfect six-pack."

Oh, that's all you have to do.

At least he knows it won't last.

Wong said he'll keep the calendar handy as he ages. 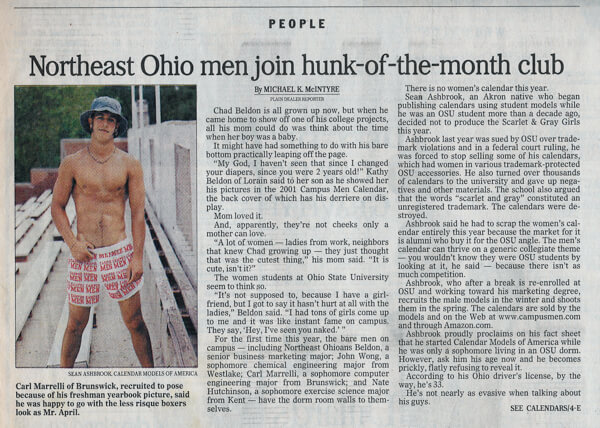