Todd Leibold always felt some people mistook his quiet shyness for being "stuck up." But posing for this year's racy edition of the Campus Men in Key West calendar may now make other people blush instead of Todd.

The 22-year-old Pleasant High School graduate and son of Marionites Rick and Sheila Leibold, is one of a dozen Ohio State University students featured in the "beefcake" version of the annual pin-up calendar.

Recruited while riding his bike on campus, Leibold said he declined the invitation of calendar producer Sean Ashbrook, when first approached last Spring.

After some thought and a little coaxing by his friends, though, Leibold decided to model for the publication.

A trip to Florida and lots of four hour photo shooting sessions were included for the young men selected for the calendar. The photo Todd picked to be printed, however, was done in less than 15 minutes when Ashbrook shot him in a wet T-shirt at the beach.

"I didn't know what to expect," Leibold said about the experience. "I'm glad l did it, but I'm not sure if I'd do it again."

All of the participants paid $399.95 which helped pay for production COSTS, transportation to Florida, by van, and lodging at the Casa Gato Mansion for the Key West photo sessions.

The models each received 67 copies of the calendars when they were printed in September which they can in return sell and pocket the money collected. Leibold has sold most of his copies and has earned several hundred dollars profit

He said his mother is his biggest fan and supported him 100 percent in the effort. "I thought it was cool," Sheila Leibold said about the calendar photo. "If he would have been nude, I may have had a problem with it. "Leibold is one of the only models fully-clothed in the calendar.

Pranksters did some minor vandalism to the Leibold home after promotional interviews with Todd on local radio stations last weekend and Mrs. Leibold feels it was because of the publicity about Todd being in the calendar.

"The code word for the photos in this calendar is 'unbelievable,' said publisher Ashbrook, "and that's how we refer to it."

The calendars have been the brunt of some criticism since they were first published in 1987.

A marketing major, Ashbrook has been involved in the publication for the past four years.

When asked how university officials felt about students baring all for the calendars, Ashbrook said, "all colleges are in the business to give students academic degrees.

"Profiling students who are picked (for the calendar) solely for their physical appearance is not something the university wants to stand for," he said.

Five thousand of the 1992 calendars were initially printed and Ashbrook said a second printing is in the works.

"The first few years we advertised for models in the university newspaper, The Lantern, " he said. "But we found we weren't getting the kind of applicants we wanted."

One day while eating lunch, Ashbrook approached a girl on campus and asked her why she hadn't applied for the female counterpart calendar, "Women of the Scarlet and Gray." She told him that she didn't think she had a chance against a campus full of coeds and, thus, Ashbrook began personally selecting his calendar candidates with that all-American look.

Leibold, a former Spartan baseball player and wrestler, said posing for the calendar has helped boost his self-confidence and that he has enjoyed meeting lots of people through the popularity he has gained. Being recognized in public gets a little embarrassing at times and he keeps very busy with promotional spots at nightclubs and radio stations.

Majoring in sports psychology and minoring in communications, he said he would like to go to graduate school at the University of West Virginia and eventually work in a collegiate athletic program.

The calendars, which hit the newsstands last week, are on sale at Waldenbooks in Southland Mall or are available for purchase from Todd's parents. 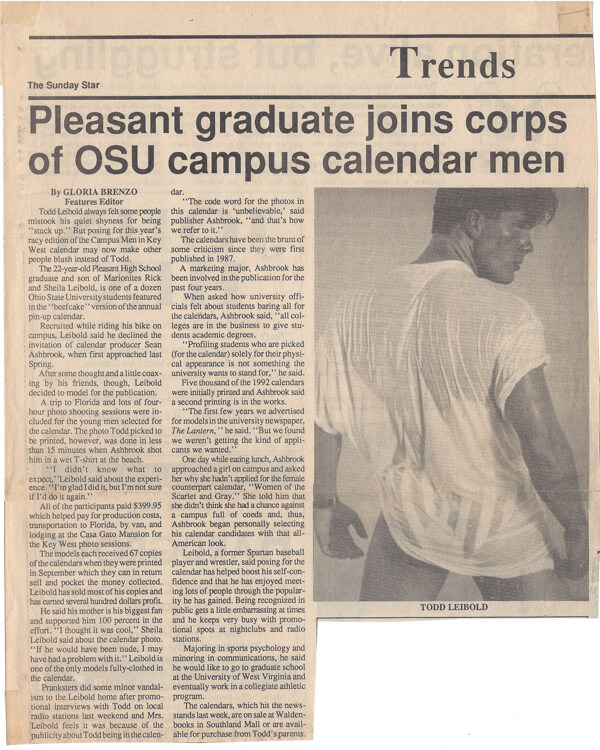